3. Moving from simulation to acquisition of real signals¶

Now that the signal analyser that has been implemented works with simulated signals, it is time to move to the acquisition of real satellite signals. To do so, the USRP has to be added as an RF front end in the labview code. This operation will add some modifications in the labview code.

3.1. Modifications due to the addition of the USRP

In fact, when we receive signals with the USRP, they are first expected to be down-converted to baseband, then filtered by a low-pass filter of 20 MHz-bandwidth and finally sampled. All these operations are controlled by the tab "USRP Configuration" in the "Analog" thumb index of the user interface. In the "Digital" thumb index, the configuration of the USRP is also available. 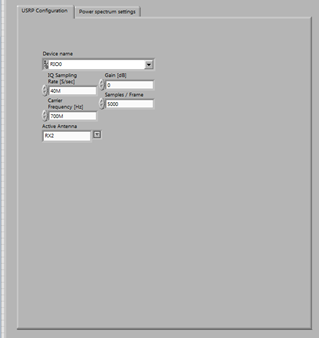 In the frequency domain, such operations are illustrated as follows:

Figure 16: Operations carried out by the USRP - Frequency domain illustration

3.2. Modifications in the computation model of the signal-to-noise ratio

The satellite signals that are received are not as simple signals as sine waves. They might not be cyclostationary and therefore, their powers cannot be computed using their autocorrelation functions. As a consequence, the power of the useful received signal will be approximated by the maximum power that is detected in its frequency band. Likewise, the power of the noise will be measured by the maximum power that is detected in the noise floor of the system. As a result, we need to measure the power of the signal and the power of the noise with two different carrier frequencies of the USRP. The problem is that we can’t do these two computations at the same time. So we first need to launch the program with a carrier frequency corresponding to the noise (being in the tab “Power Spectrum Noise”) and after we launch it again with the carrier frequency of the signal (being in the tab “Power Spectrum Signal”). A step by step method will be more detailed in the section III - Tests and validation.