The purpose is to reproduce the satellite channel emulation at RF level in the Satcom lab. The transmission link will be influenced as in a real environment. In the case of the channel emulator developed in the geo satellite system, the channels refer to the links from a terrestrial station, via a transparent satellite and finally to another terrestrial station. As shown in Figure 1, it is a typical satellite access scheme for the connections of forward and return link channels. Each link is equipped with a PC, a modem EL470, a dish antenna. The forward link and return link communicate with each other through a geo satellite. 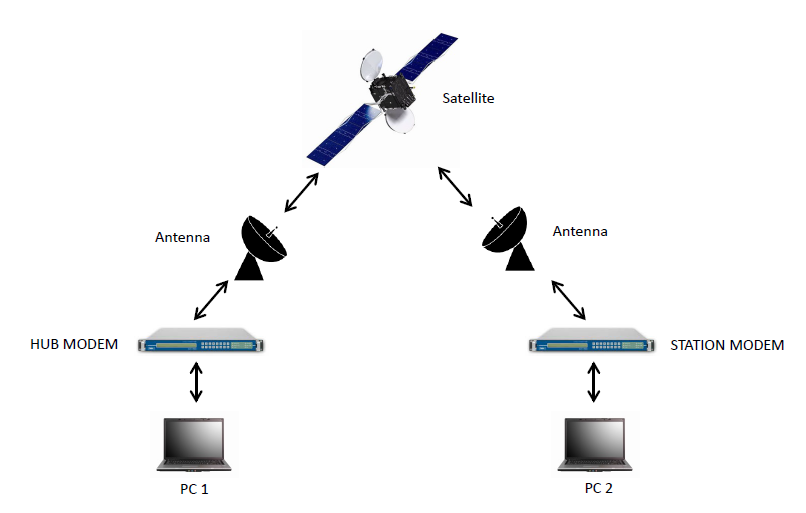 In this project, we remove all the elements between the two modems in order to make the emulation with NI hardware and LabVIEW software. As shown in the figure below, the emulator generates the signal to make the two modems believe that the bi-directional satellite Internet access still works.

The satellite channel emulator offers a cost-effective and time-saving solution. Its highly optimized and scalable signal processing unit offers real time simulation of influences on the signal at the satellite as well as on the transmission link. With this emulator, satellite can be generally simulated and tested prior to its realization. In addition complex operational scenarios for equipment and satellite testing can be set up in a more efficient way.

In general, hardware-based satellite channel emulators are around 100k euros on the market thus it is such a high price for the common customers. Compared to a realistic environment, emulator is much less costly. In fact, it is possible that the total price of the instruments is around 5k euros with controllable features of emulations in the lab. Another motivation to carry out the emulation is related to the bandwidth, given that, the bandwidth for the common satellite emulations on the market is up to 600MHz while it is accessible to reproduce it with only 5MHz.

As far as satellite emulation is concerned, it is increasingly significant to use the FPGA (Field Programmable Gate array) as a resource of software-define radio system (SDR). This implementation technology provides important advantages with higher performances, such as higher design flexibility and lower cost per channel.