Due to the fact that the modems operate in L-band (1-2 GHz) transmitting data at 2 Mbauds, the use of NI PXIe-5644R results in an affordable solution for satellite channel emulation. Figure 2 depicts the tasks carried out by the NI devices to process the incoming QPSK signal.

Besides that, the NI PXIe-5644R also provides an integrated LabView programmable FPGA which enables high power processing. In this project, the signal processing is executed in the NI PXIe-8135 instead of the FPGA due to time constraints.

The LabView development is mainly based on the VST Streaming project and the previous QPSK implementation functions such as the noise generation, the delay effect and the visualization tools.

The front panel is illustrated in Figure 3, the following features are provided 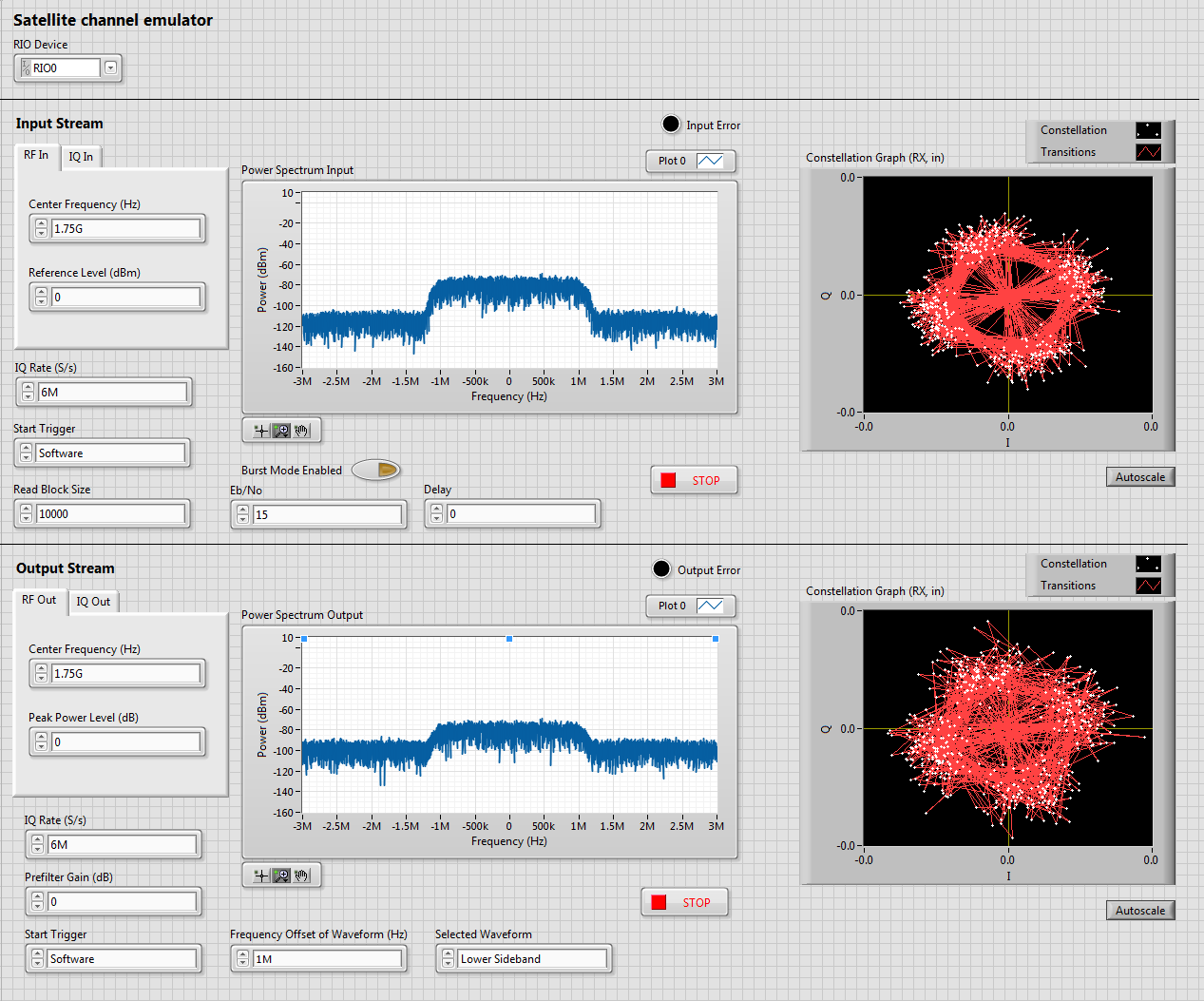 On the other hand, the whole block diagram implementation consist of five major parts which will be explained below

The initialization and configuration of the VST is shown in Figure 4. The VST local oscillator (LO) is configured to operate at the required frequency and the trigger function is set up to ensure synchronized samples across the RF inputs and outputs of the VST at a given sampling rate. This block also downloads the FPGA bitfiles on the VST for execution. 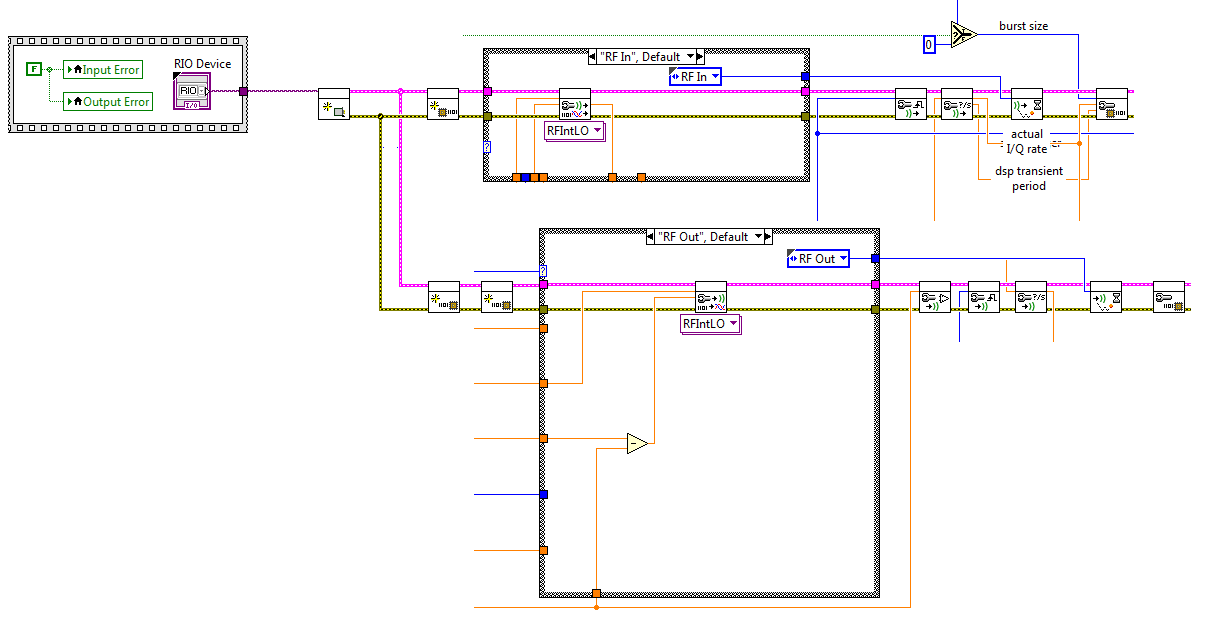 Acquisition of the QPSK signal¶

In Figure 5, it can be seen how the acquisition loop reads the samples stored in a Direct Memory Access (DMA) buffer. A DMA channel is composed of two FIFO buffers: one on the computer side and another one on the FPGA side. Therefore, in order to recover the QPSK samples, a function block writes data from the FPGA to the DMA buffer and another function block on the computer side reads the data from the target buffer. 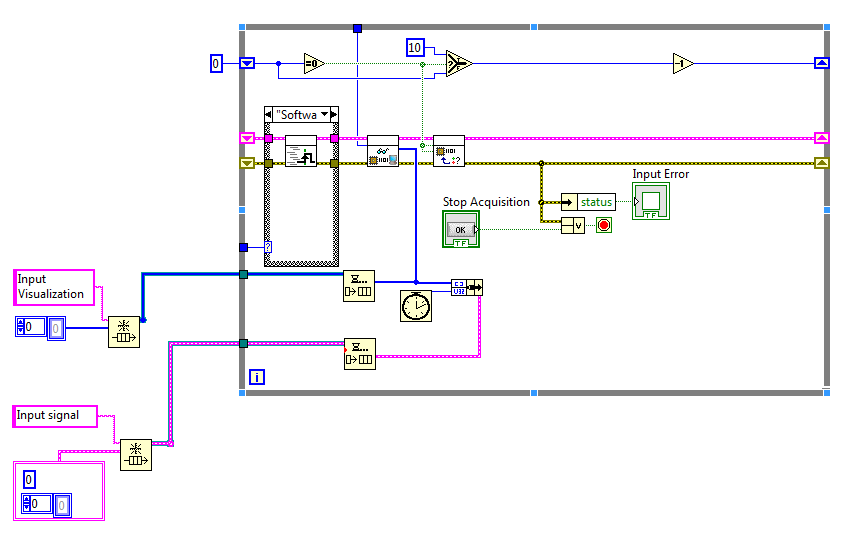 Since the unsigned 16-bit integer format is used to represent the samples, a function converts these samples into complex symbols in order to reuse the functions developed in the previous implementation.

Once the data is formatted, the samples are added to a FIFO queue. As in the previous LabView development, the queue approach is implemented to connect the main function loops.

After removing the complex symbols from the queue, the signal power is calculated in order to determine the required noise power for a given $Eb/No$ value that is selected by the user. So that, a noise signal is generated and added to the complex one as shown in Figure 6.

In order to create a time delay $t_d$ in the transmission, the noisy samples must wait in the loop for a period of $t_w$ before being delivered to the DMA buffer. As explained later, it must be noticed that the total delay generated by the emulator comprises the required delay as well as the processing time performed in the VST.
Therefore, the waiting time $t_w$ is calculated as follows

Considering the mentioned aspects, the data transmission to the DMA buffer is delayed by $t_w$ once when the first cluster of symbols is received in the output loop queue. The block diagram implementation can be observed in Figure 7. 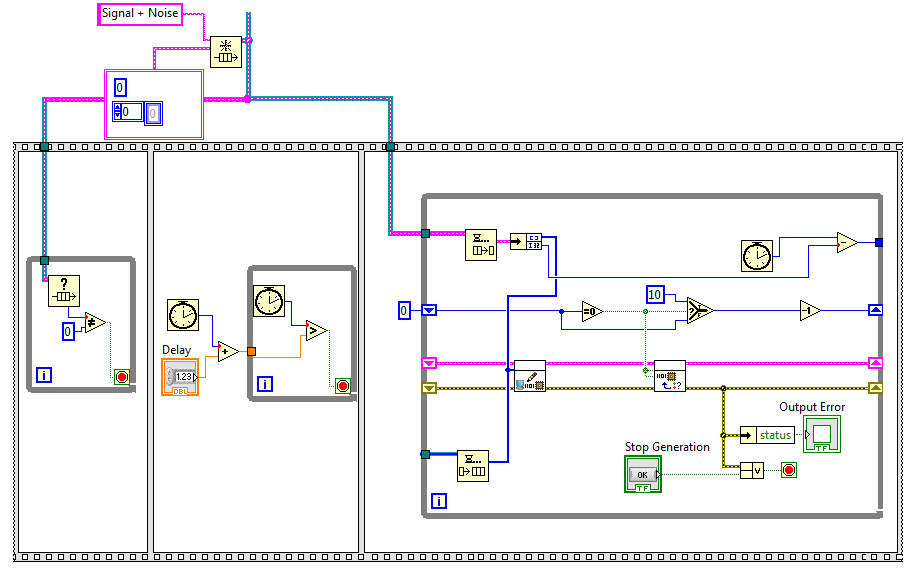 Finally, the channel-applied signal samples are dequeued and written to the DMA buffer in order to be converted from a digital format to an analog signal as shown in Figure 8. These samples are interpolated via a DAC, subsequently, the analog signal is up-converted to the required frequency carrier. 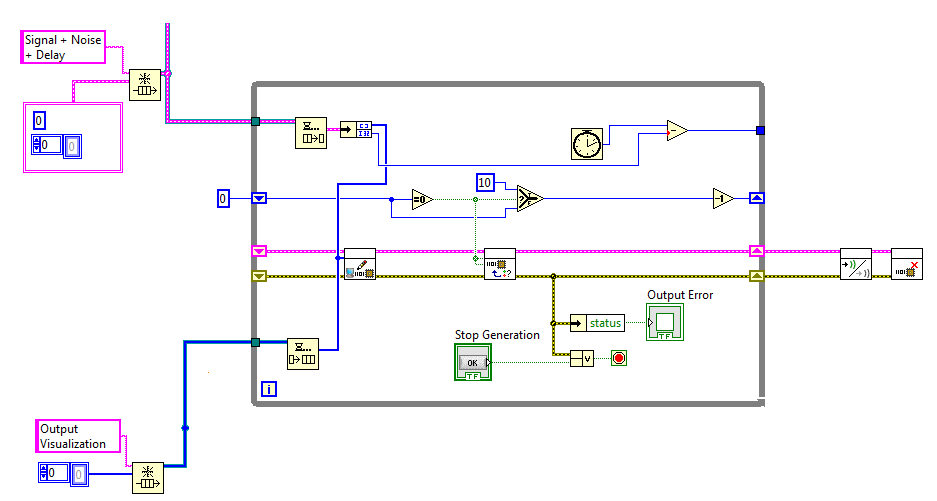 In order to analyze the transmitted signal, the symbol constellation, the eye diagram and the power spectral density of the QPSK signal are plotted. These loops are executed in parallel to exploit the multiprocessor computing power. As can be observed in Figure 9, there are two visualization and monitoring loops: one before and another after the channel.