This part is dedicated to explain and illustrate the main steps that have been done in order to retrieve a navigation signal and to compute the position of the receiver from the pseudo-range measurements of 4 satellites. PART 2, PART 3 and PART 4 provided a theoretical background on GPS signals, the main blocks of a GPS receiver and methods to compute the position using the navigation data. Now, it is time to put this theoretical knowledge into practice.
As lots of VIs have been created, a UML diagram has been drawn to illustrate the structure of the overall code. For each main step that will be described, a link to the UML diagram will be provided, the different VIs to be taken into consideration will be listed, a few key points regarding the implementation will be clarified and the results will be displayed.

Labview is a modular dataflow programming language that relies on block diagrams interconnected with each other. Each block diagram represents a node, a function that can be run as soon as its inputs are available. Then, it computes outputs used as inputs by other nodes. Any created program can be reused as a node in a higher-level program, hence the modularity of Labview. While running a program, each input can be controlled thanks to a user interface known as a “front panel”. Likewise, every output can be monitored and displayed using the front panel. As a matter of fact, the front panel is closely linked to the program called the “block diagram”. Indeed, every primary input of the block diagram are defined and controlled via the front panel.

b - Receiver scheme and milestones.¶

The software-defined GPS receiver to be implemented should take as an input a sampled signal that has been received and down-converted by an RF receiver front-end. As our RF receiver front-end was missing an antenna, we used a recorded GPS raw signal from the output of an RF front end (from CD [1] under GNSS_signal_records/GPSdata-DiscreteComponents-fs38_192-if9_55.bin). In order to read properly the data that are contained in the recorded file, one needs to know the sampling frequency and the intermediate frequency of the raw signal.
Sampling frequency = 38.192 MHz
Intermediate frequency = 9.55 MHz
The following diagram sums up the general structure of the GPS receiver to be implemented. In Figure 5.2, a PRN sequence corresponding to satellite 21 has been generated with a sampling frequency of 38.192 MHz. This PRN sequence lasts 1 ms (a zoom has been done on the figure in order to see the sequence of chips).

See the UML Diagram of Section 2 under : Acquisition.PNG

In PART 3, three different methods for acquisition have been described. Each of these methods exhibits different performances regarding the execution time and the accuracy of the frequency and code phase estimations. It has been explained that the parallel code phase search acquisition is less time consuming than the others. Likewise, it is more accurate regarding the estimation of the code phase, which will facilitate the convergence of the DLL towards its settling state. Thereby, the parallel code phase search acquisition will be implemented.

The link and the figure below illustrate the front-panel of the Main_Acquisition VI. 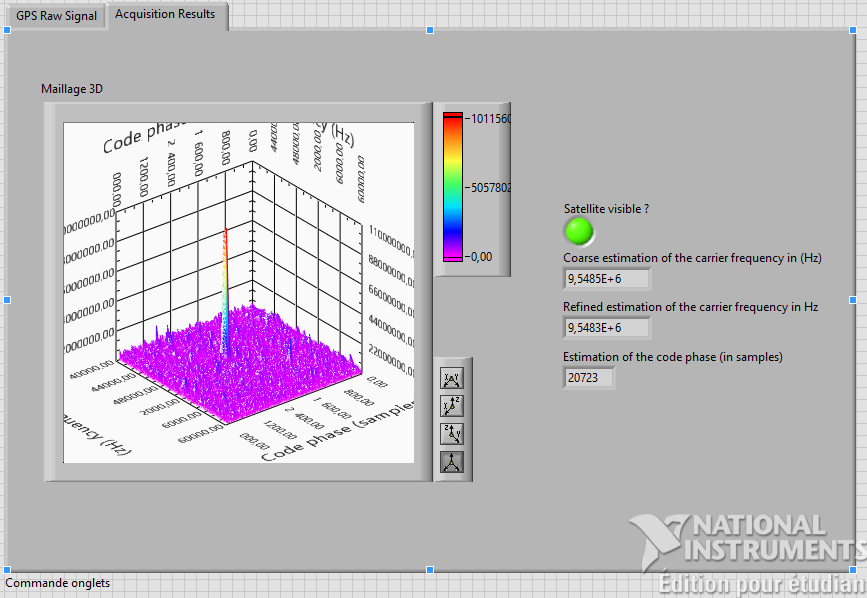 See the UML Diagram of Section 2 under : Track.PNG

The DLL aims at updating the code phase of the locally generated PRN sequences for them to be perfectly aligned with the incoming PRN sequences. A PRN sequence is supposed to span over 1 ms. Therefore, the updating process of the DLL will be carried out over 1ms and the signal will be cut into slots of 1ms for the computation. Nonetheless, because of the Doppler shift that is induced by the motion of the satellite relatively to the receiver, the duration of an incoming PRN sequence might vary around 1 ms. Thus, a phase shift is introduced by that Doppler shift on the next millisecond to process. The DLL analyses this phase shift and adjusts the size of the window (=slot) for the next iteration. This way, the updating process vary around 1 ms and keep track of the code phase.
The following links and figure illustrate the front-panel of the Main_Tracking VI (/!\ The Main_Acquisition VI has to be run first in order to have the right inputs for the Main_Tracking VI). 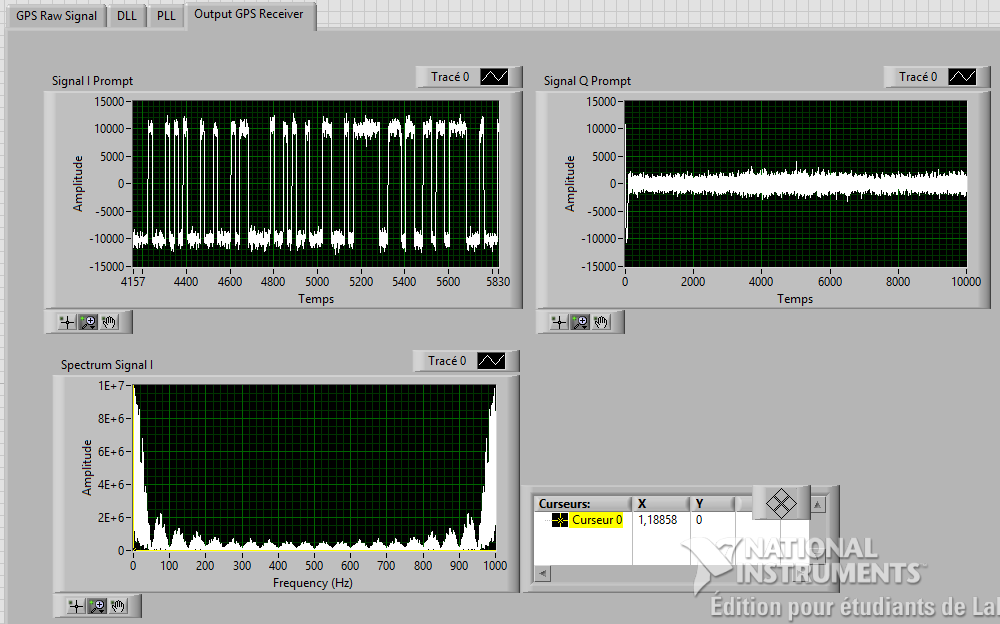 Figure 5.5: Retrieved Signal at the output of the Tracking Block of the SDR GPS receiver.

See the UML Diagram of Section 4 under : NavigationData.PNG.

findPreamble.vi finds the first preamble occurrence [1 -1 -1 -1 1 -1 1 1] in the bit stream of each channel. The preamble is verified by check of the spacing between preambles (6sec) and parity checking of the first two words in a subframe. At the same time function returns list of channels, that are in tracking state and with valid preambles in the nav data stream.
This program has been tested via TestFindPreamble.vi for an arbitrary frame and perfectly delimits the subframes as it is depicted : Still for certain real signals, false alarm of preamble occurence is detected even with protection such as the parity check and the 6sec distance. 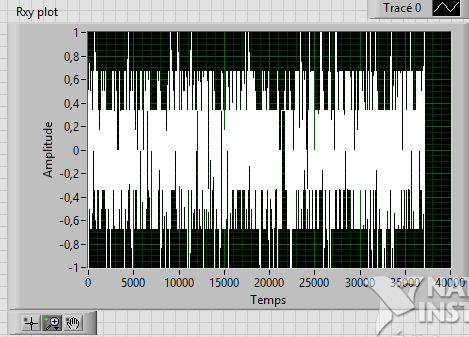 It prevents to find correctly the delimitation of the different subframes : refinement need to be implemented for such cases.

b- Decoding ephemeris and information within the frame.¶

Function Ephemeris.vi decodes ephemerides and TOW from the given bit stream. The stream (array) in the parameter Navigation bits must contain 1500 bits. The first element in the array must be the first bit of a subframe. The subframe ID of the first subframe in the array is not important.
Extracted ephemeris data are as mentionned in PART 4.

See the UML Diagram of Section 5 under : Localization.PNG

Computation of satellite coordinates X,Y,Z at TransmitTime for given ephemeris Ephemeris data. Coordinates are computed for one satellite by applying the algorithm of PART 4.
TestSatellitePosition.vi goal is to test SatellitePosition.vi with ephemeris data collected from GPS signal by University of Colorado [2] . The figure illustrates the computed satellite orbit level with respect to Earth radius level : 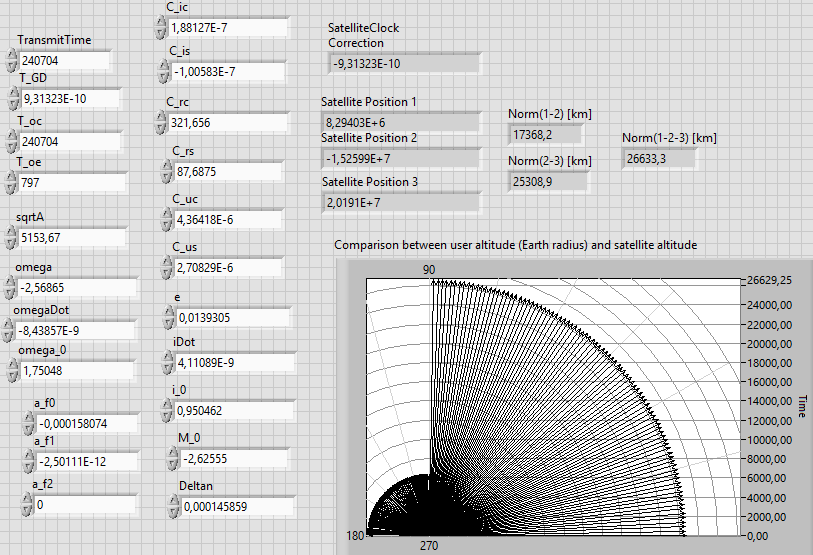 Figure 5.8 : Interface with ephemeris as input and illustration of the satellite position.

The file involved is :
PseudorangesComputation.vi

PseudorangesComputation.vi finds relative pseudoranges for one satellite at the specified millisecond of the processed signal which has been stored in the file absoluteSample_sat(i).txt after the tracking function. The pseudoranges contain unknown receiver clock offset. It can be found by the least squares position search procedure in the following.

Function LeastSquarePosition.vi calculates the Least Square Solution based on the demonstration of PART 2 - Section 2.
Moreover it is also necessary to apply different change of coordinates system such as toTopocentric.vi , CartesianToGeodetic.vi and rotation SatelliteRotationECEF.vi
Finally, the tropospheric correction for pseudoranges accuracy is computed in this part. 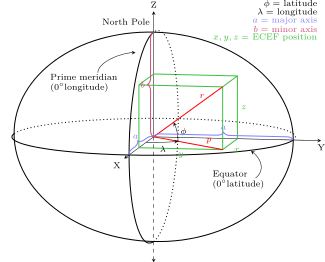 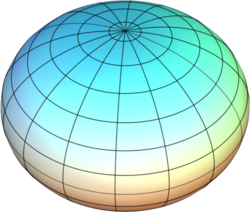 See the UML Diagram of Section 6 under : Receiver.PNG

For the sake of structuring, a block NavigationProcess.vi includes FindPreamble.vi , Ephemeris.vi , SatellitePosition.vi in order to fine-tuned the process for one satellite from frame delimitation to satellite position determination.
ComputeReceiverPosition.vi is the main VI . It combines navigation process of different satellite, loops on pseudoranges measurement points and deduces receiver position via Least Square VI and the associated DOP (Dilution Of Precisions).
Then, the receiver coordinates are converted into UTM coordinates with CartesianToGeodeticForUTM.vi and CartesianToUTM.vi 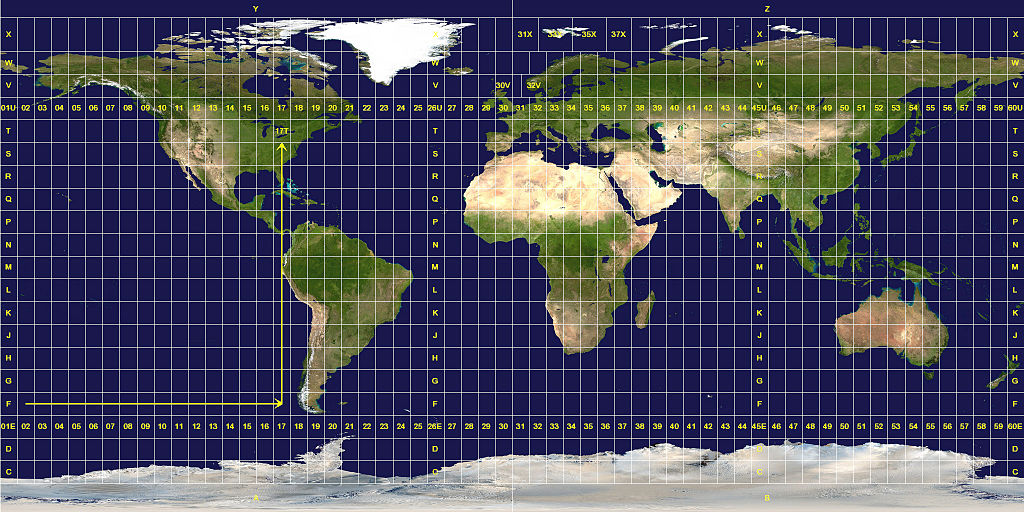 7 - Complete UML Diagram of the receiver.¶

The UML diagram with real size is available under : UMLDiagram.png

Here is a small overview of the structure :