Design and integration of a Ka-band terminal¶ 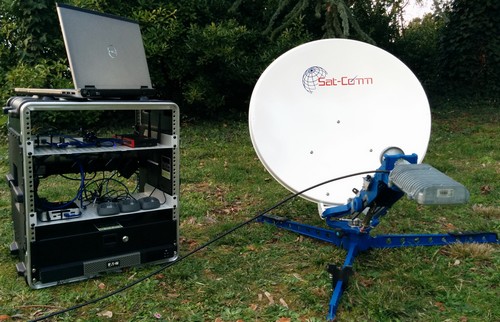 The satcom lab of Télécom Bretagne will soon be equipped with a TooWay/KA SAT facilities (bi-directional internet via satellite) that come in two flavours: a fixed antenna for access within the lab and a fly away antenna for on-the field access. On-the-field access is provided through a transportable terminal (see pictures below). The transportable terminal integrates a modem, networking facilities and end-devices (e.g., DECT/VOIP phones).

The objective of this project is to design and integrate the portable terminal taking into account all aspects: communication, networking and physical integration.

The transportable terminal provides services in inhospitable and isolated locations. In particular, our aim consists in bringing internet access through wired and WiFi IP network and to provide internal and external VoIP calls. The terminal is composed of two antennas (one fixe and another one mobile) and a modem to receive the signal from the Ka-Sat satellite and convert it into digital signal. One router, a Dect and some IP phones constitute the second part of the terminal to share the network between the internet access and the phone calls. In the first part of the project, we have identified the use cases and the corresponding network architecture (address and routing plan). Then we proceed with the integration of the networking and communication components in a ruggedized flight case. Later we have connected the transportable terminal to the fixe antenna to realize some tests and demonstrations of the overall system. The terminal is transportable with its mobile antenna and could be used during important and catastrophic events by the red cross for instance to keep them in touch with the head quarter.

Coordinates of the satellite cell:
Tooway