When the communication between the USRPs was established, the transmitted constellation below was obtained. 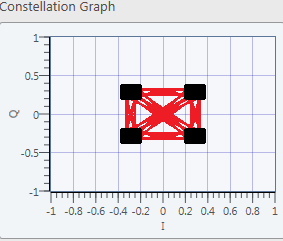 Using the reshape function in LabVIEW, the symbol rate of 62500 symbols/sec is multiplied by the number of samples per symbol, since the demodulator dunction assumes that this would be the sample rate of the input waveform. The received constellation is shown below. The $BER$ in this case is, evidently, 0. 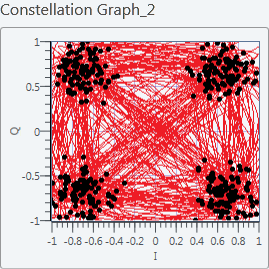 With AWGN, the $BER$ is calculated, then compared to the theoretical one, obtaining a $BER$ vs $E_b/N_0$ graph like the one depicted below in Figure 6.4. It can be seen that the simulated $BER$ follows, as expected, the same behavior as the theoretical $BER$, validating simulated results Figure 6.4 BER vs Eb/No without coding

The $BER$ is also calculated for a the BCH code(31,15,3) and for BCH code(7,4,1), and compared to the simulated $BER$ without coding. The resulting graphs presented below