In this section we are going to explain what is a satellite link budget and what are the main parameters it involves.

Assuming that a telecommunication system is composed by a transmitter a medium and a receiver, the link budget is the accounting of all gain and losses in the power signal from the transmitter, passing through the medium, to the receiver.So, the link budget analyses how much power is lost in the signal path. With link power analysis it's possible discriminate the value of power loss in each equipment and sub-path.

To easily understand, we can analyse the satellite system showed in figure 1. Considering a signal one-way-travel, just analyzing the individual uplink path, the link budget will perform the power received by the satellite taking in account the amplification and the attenuation of the link.The link, in this case, is composed by the transmitter: the Earth Station, the media: the atmosphere and free space ,and the receiver: the Satellite. Then, in the link budget calculating, we taking in account the following losses and gains: 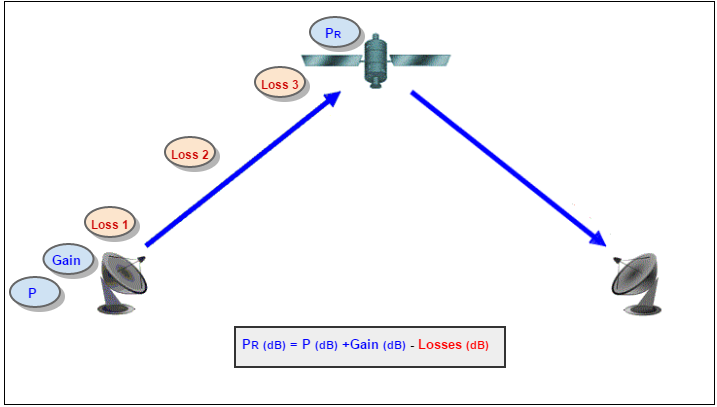 To evaluate the quality of our link, one important measure is the Bit Error Rate, $BER$. If we want that our signal maintain a low $BER$ we must to start the transmission with a higher power. We have to be sure that even with all losses along the path way, we'll have enough power available at each point, to keep this $BER$ value.The $BER$ is a function of the bit energy per noise-density of the signal $\frac{Eb}{No}$. The ratio between $BER$ and $\frac{Eb}{No}$ depends on the digital modulating implemented. An example of $BER$ x $\frac{Eb}{No}$ graphic is showed in figure 2. Higher $\frac{Eb}{No}$ means better quality. Other important parameters to consider in link budget analysis performance are:

It's a measure of the power received by receiving equipment, "C", and the noise power density $No$, introduced in the transmission medium. It is also a measure of the quality of modulated carrier in the receiver input.

The figure of merit is expressed by a ratio between the maximum gain of a receiving antenna to the system equivalent noise temperature.In general it is expressed in dB/K. This relation is also a measure of the ability of the receiver to receive a signal with good quality (high carrier-to-noise ratio).

Figure 3 shows the detailed elements and parameters involved in a satellite link. The transmitter $Tx$ is connected to the antenna by a feeder. The antenna has a gain $G_T$ in the receiver direction. The power radiated by the emitter after the feeder loss $F_{FTX}$ is $P_T$. The receiver antenna has a gain $G_R$ in the direction of the transmit equipment, connected by a feeder in a receiver equipment $Rx$. In the receiver input the power received is denoted by $C$. in the link, all sources of noise contributes to the system noise temperature $T$. The ${(C/No)}_T$ depends on the system noise temperature (which condition the noyse power spectral density $No$).